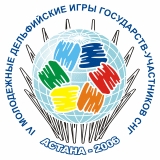 This year the Higher Forum of art was devoted to the 15th Anniversary of the Commonwealth, what determined main themes of nominations and gave young talents of different countries the direction for the creative search.

The event was prepared and held jointly by the National Delphic Committee of Kazakhstan, the Ministry of Education and Science of the Republic of Kazakhstan, the Ministry of Culture and Information of the Republic of Kazakhstan and Akimat of Astana city with the assistance of the CIS Executive Committee, the Council on Cultural Cooperation of the CIS Member States, the Work Group on Development of the Delphic movement in the CIS Member States and under the patronage of the International Delphic Committee (IDC), which headquarters is located in Moscow. As observers the following people were present during the Games: the Director of the IDC, coordinator on preparing and holding the Delphic Games of the CIS Member States Vladimir N. Ponyavin (Russia); the co - chairman of the Board of the IDC Aurelian K. Denile (the Republic of Moldova), the member of the Board of the IDC Damian T. Leskin (the Republic of Belarus).

Greetings for the Games were received from UNESCO Director - General Koichiro Matsuura, the Chairman of the Executive Committee – the CIS Executive Secretary Vladimir B. Rushailo, the Director of the Directorate of Youth and Sport of the Council of Europe Ralph – Rene Weingaertner.

The Official Opening Ceremony of the Games took place on October 25, 2006 at the Palace of Peace and Harmony. After theatrical prologue dedicated to the ancient and contemporary history of the Delphic Games participants and guests were greeted by the acting Minister of Education and Science of the Republic of Kazakhstan Azamat K. Abdymomunov, the Chairman of the Committee for Social and Cultural Development under Senate of the Parliament of the Republic of Kazakhstan Kuanysh S. Sultanov, the Director of the Department for Humanitarian Cooperation, General Political and Social Problems of the CIS Executive Committee Boris V. Timokhov, the adviser of the President of the Russian Federation, co-chairman of the IDC Tutorial Council Sergey N. Samoilov, the coordinator on preparing and holding the Delphic Games of the CIS Member States Vladimir N. Ponyavin, who declared the Games open. The Concert of masters of art of Kazakhstan was opened by the Main Judge of the Games, the People’s Artist of the USSR, the Hero of Socialist Labour Bibigul A. Tulegenova.

Winners and awardees received gold, silver and bronze medals as well as special diplomas of the Games. It is important to mention that those were the first Games where delegations of all countries, which took part in the Games, won gold medals. It certainly shows a better quality of selecting participants and a better level of preparing the teams.

Following the results of the meeting of the Work Group on Development of the Delphic movement in the CIS Member States, which took place on October 28, 2006 in Astana city, it was determined that according to the Decision of the 21st meeting of the Council on Cultural Cooperation of the CIS Member States dated October 9-10, 2006 it is necessary to hold talks on organizing the Fifth Anniversary Youth Delphic Games of the CIS Member States in 2007 in the Republic of Belarus. Besides, it is necessary to suggest that the Council of Europe uses the concept and experience of the Youth Delphic Games of the Commonwealth as a model of the intergovernmental Higher Forum of art for holding the Open Youth Delphic Games of the Council of Europe jointly with the International Delphic Committee in 2008.

The Official Closing Ceremony of the Games took place on October 29, 2006, after the ceremony the Gala Concert of winners of gold medals of the Forth Youth Delphic Games of the CIS Member States took place.

During preparation and holding of the Games in Astana and Moscow the wide informational and advertising campaign with usage of central TV channels and radio stations, news agencies, outdoor advertising, press and internet was arranged. The International Television and Radio Company “Mir” took an active part in promoting this event on the territory of the Commonwealth.